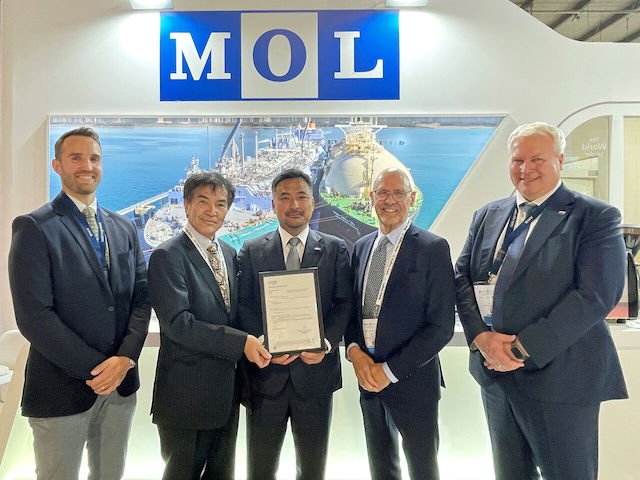 An Approval in Principle (AiP) is an independent assessment of a concept within an agreed requirement framework, confirming that a design is feasible and that no major showstoppers would prevent the concept from being realized.

MOL and MHIMSB jointly designed the LCO2 vessel, with the concept study completed in November 2021. After conducting a HAZID risk assessment, both parties applied for the AiP which was granted by DNV according to the Class notation “1A Tanker for liquefied CO2”. The main focus of the DNV assessment has been the DNV Rules on Liquefied gas tankers (Pt.5 Ch.7 July 2021) as well as the IGC Code.

“The AiP award is an important milestone in our Group strategy to achieve net zero GHG emissions by 2050. Through this demonstration project, we will further accelerate our R&D initiatives on liquefied CO2 transport, contributing to the realization of a low- and de-carbonized society,” said Makoto Yamaguchi, Executive Officer and Chief Technical Officer at MOL.

“We are very pleased to be awarded the AiP from DNV through collaborative development with MOL. We believe that LCO2 carriers are essential pieces in the Carbon Capture, Utilization and Storage (CCUS) value chain, which will contribute to achieving a decarbonized society in the near future.

“We will continuously move forward the technology development of LCO2 carriers in cooperation with partners seeking to achieve the shipping industry’s decarbonization goals,” said Toru Kitamura, President of MHIMSB.

“CCUS is gaining traction around the world as a technological solution which helps reduce the impact of CO2 emissions. Maritime transport can play an essential role in building up an efficient CCUS value chain, which is expected to lead to an increasing demand for specialised LCO2 carriers going forward,” said Vidar Dolonen, Regional Manager DNV Maritime Korea & Japan.

← Chevron Granted Interest in Three Permits to Assess Carbon Storage Offshore Australia Cement Industry to Scale Up CCUS →
VIEW ALL NEWS
SIGN-UP TO RECEIVE FREE INDUSTRY NEWS
This website uses cookies to improve your experience. We'll assume you're ok with this, but you can opt-out if you wish. Accept Reject Read More
Privacy Policy